A gift from the survivors of Mauthausen

The Flag with Fifty-Six Stars

One. Creating Unity Through Art

This 56-star American flag was made by prisoners at Mauthausen Concentration Camp in Austria at the end of WWII. Not knowing their fate or how or if they would ever see their freedom, detainees secretly used sheets and jackets to make a United States flag so they could gift it to the American Soldiers when they were liberated. The prisoners could not remember how many stars the United States flag had so they made their flag with 56 stars.
They clearly believed that Americans would set them free and our flag, a global symbol of freedom served as a beacon of hope in desperate and dire times.

Check out our workshop photos form The Museum of Tolerance! 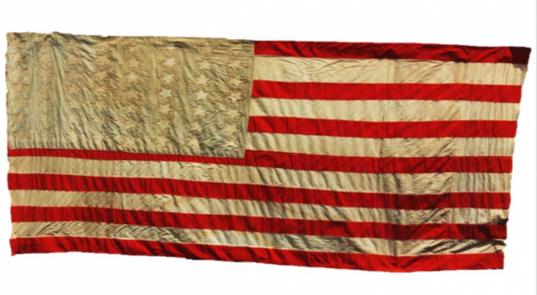 Creating Unity Through Art is a community art initiative with the goal of being a creative catalyst to encourage unity and 'oneness' among all Americans. By creating art that is inspired by our American flag, it is our hope to help close the divide that exists as a result of our current political times. The simple experience of sitting among friends and strangers creating their own personal rendition this symbolic national icon is a reminder of the significance and power of the American flag and the commonalities among us.