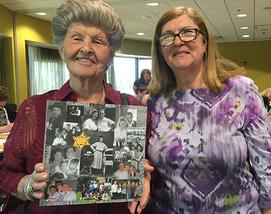 I was born in Tureyia Paseka, Czechoslovakia. The Nazis came on Passover and took us away. We didn’t even have time to take any of our belongings. My mother, father, two sisters and one younger brother were gassed in Auschwitz. My two older brothers survived and immigrated to Israel and then to the United States. I married my husband Israel Stern after the war. We lived in Gailingen, Germany in a DP camp where my husband went all over Germany to help bring young people to Israel. We immigrated to the United States in 1950. I have 3 children, 6 grandchildren and 1 great-grandchild. We co-owned Weiss’s Deli on Lombard Street and then owned Middleman and Weiss. He also founded an organization to help new immigrants coming to Baltimore.​