Rosa was born in 1926 in Koniecpol, Poland, and grew up in Bedzin with three sisters and one brother. Her parents had a leather goods shop. On 3 September 1939, the family, except for the eldest sister Lola who had fled to Russia, was sent to the Bedzin Ghetto. From there they were relocated to the Markstadt Camp, a sub-camp of Gross-Rosen in Germany. In 1944, Rosa was sent to the Peterswaldau Camp, in which the conditions were much harsher. From there, Rosa was liberated on the 8th May 1945. Only her sister Lola, and her older brother survived. In 1960, Rosa immigrated to Australia from Israel with her husband Motek and their two children. “I have seven great grandsons. Hitler didn’t survive long enough to kill me too. We are all the same. Do not discriminate!” 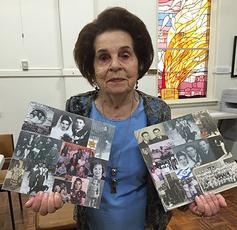